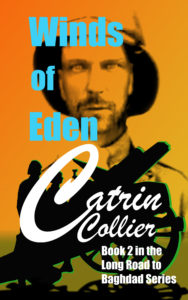 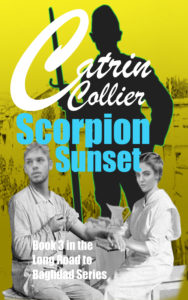 The trilogy began as a conversation with a survivor and veteran of the campaign, Christopher Marley. He volunteered to fight in the First World War, little thinking he would be sent to Mesopotamia. He participated in the British Forces triumphant march into Baghdad in 1917, where he promptly contracted typhoid, fell into a coma and was issued with a death certificate by overworked medical staff in a military hospital. The orderly in charge of the burial party thought Christopher’s corpse didn’t look “quite right” so it was set it aside for the next party. When Christopher eventually came round  it was to find that as a dead man he was no longer entitled to rations or uniform. It took six months for him to be restored to his regiment’s roster. I am indebted to him for his account of a side show war that cost 97,000 British casualties.

Mesopotamia, 1914: in the Middle East tension escalates between the British and the Arabs. Misfit Lieutenant Harry Downe is sent to negotiate a treaty with a renegade Bedouin Sheikh, Ibn Shalan, whose tribe attacks enemy patrols in Iraq and cuts their oil pipelines. Desperate for arms, Shalan accepts British weapons but needing to save “face” demands that in return, Harry accepts his daughter Furja as his bride. The secret marriage leads to a deep love, to the anger of Shalan, his tribe and the disgust of Harry’s fellow officers. But war looms, and the horrors of the battlefield threaten to destroy Harry’s new found happiness, and transform his life and that of his closest friends for ever.

Long Road to Baghdad is a vivid, moving, historically accurate account of a conflict between East and Western Empires, based on the wartime exploits of war hero Lieutenant Colonel Gerard Leachman.

13 July 2017 – I did not know what to expect when I ordered this book. However on reading the contents , I found it to be an excellent and fast paced historical novel based on the days prior to and after the the battle of Kut which occurred in the Middle East during the First World War. Collier’s excellent writing brought the characters to life . I will definitely be reading the subsequent books in this series.

Annabelle
5.0 out of 5 starsAn important book

26 November 2012 – Epic storytelling in the grand tradition of M M Kay’s The Far Pavilions, this well-researched tale of the loves and passions of 3 British soldiers fighting in the WW1 campaign in Mesopotamia had me gripped from the very first page. This is not to say that it glorifies or romanticises war – the author pulls no punches in describing its senseless horror or the dissociation of the top brass from the stark realities faced by soldiers on the battlefield. The writing has a raw immediacy that draws the reader right into the action, and the issues discussed are as relevant today as they were 100 years ago.

December 1915. Following heavy casualties, General Townsend withdraws his exhausted troops to the town of Kut Al Amara, Iraq. His orders to engage as many Turkish troops as possible in a siege. A relief force is hastily assembled, among them Charles Reid, Tom Mason, and Michael Downe. For each, the advance is personal. Charles returns to the country where he lost the love of his life. Tom’s brother John, an army surgeon, awaits execution. Michael’s brother Harry, an army intelligence officer, is missing, after disappearing on his last mission. Short of everything except sick and wounded, reduced to eating their horses, the garrison is repeatedly thrown against the might of the Turkish guns. The men wonder if they will ever see home and their wives again. For their families, the strain reaches breaking point as they wait for news from the front. As the death toll rises, the British War Office faces the unthinkable: defeat for Townsend and his 10,000 men.

18 September 2014 – I don’t know how she does it but Catrin Collier tells amazing stories that draw the reader in and cause them to lose sight of their mundane lives for hours as they read from cover to cover discovering other worlds, worlds so exciting and dramatic and real, more real than the everyday mundanity of their usual existence…..thank you.

18 August 2015 – This was a superb read about a war which I never knew existed. Very graphic and totally moving, couldn, t wait to read the full series

1916, Mesopotamia. The Turks order prisoners taken after the fall of Kut to march hundreds of miles to Baghdad. The men are weak from starvation after the five-month siege, with many suffering from dysentery, scabies, and malaria. They lack medical supplies – and the hot weather begins. Hundreds of men die on the march, the stragglers killed by Arab tribesmen; those too ill to move, abandoned to die. But the tide of war turns when the British march victorious into Baghdad. Taking control of Mesopotamia, the British discover they do not have  the resources to govern it, but peace treaties are signed and the POWs taken after the fall of Kut who survived the death marches and imprisonment are released into an uncertain world. Among them is medical officer, Major John Mason, his health ruined and spirits broken. His old friend Charles Reid is more optimistic as love blossoms. Harry Downe is occasionally sighted living with his Bedouin wife’s tribe: but how much of his past does he truly remember? Harry’s journalist brother Michael seeks answers amidst the ruins of war as their friends and comrades  struggle to survive in the aftermath of the conflict.

S. Downer
5.0 out of 5 starsI’M SORRY TO HAVE FINISHED ALL THREE.
4 August 2016
It’s very unusual for me to write a review but I am so impressed with the three books in the series, I loved the first one and quickly bought the other two and read them all in a week so now feeling sad. Brilliantly written and researched, I really cared about the main characters and had to follow them to the end. I hadn’t heard of this author before but will now be looking for her other novels. Thank you Catrin Collier for giving me so much pleasure.
Kate
5.0 out of 5 starsScorpion Sunset
7 September 2015
Brilliantly written, couldn’t put it down and was very sorry when I had finished the trio of books. The author has captured everything so well you can imagine yourself part of the story as though you are living it. It is a shame so many men, women and children had to go through so much heartache and pain. Have now read 26 of Catrin Colliers books and really have enjoyed them. Would fully recommend them.